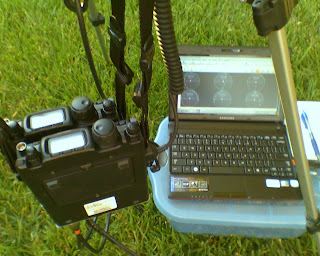 For anyone that's interested, here's a complete description of the set-up I'm using for my portable sat operation. This is what I use for the satellite contacts, and is basically two twin FT-817ND radios hanging on a tripod, with an antenna above, and a netbook computer sitting beside. The system works great so far! I'll try to keep this description updated as things change, but this is what works for me right now... 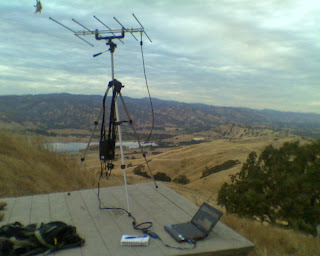 I use an Elk Dual Band 2M/440L5 log-periodic antenna . The antenna is mounted to a lightweight photo tripod, with the mounting PVC pipe modified to fit the quick release adapter on the tripod (this allows easy removal of the antenna from the supporting tripod). This arrangement allows for easy azimuth, elevation, and polarization control during the pass. 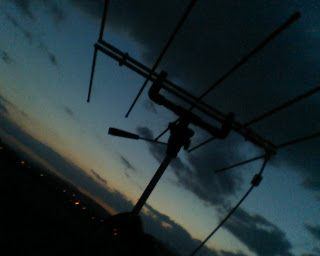 The antenna is connected to the diplexer via a 6-foot length of RG-8X cable. The diplexer is a Diamond MX-72H unit that reportedly provides 60 dB of isolation between the 2m and 70cm input/output lines. The 2m ouput is marked with orange tape, the 70cm output is marked with blue tape; this color scheme helps to identify the appropriate cable connections for the whole system.

The radios that I use are twin Yaesu FT-817ND all-band multimode portable QRP units. I don't have one radio dedicated to TX one to RX, but instead one is dedicated to 2m (RX and TX) while the other is dedicated to 70cm (RX and TX). In keeping with the color scheme, the 2m radio is marked with orange tape, while the 70com radio is marked with blue tape (quite necessary since both FT-817ND's look identical!). I also have the radio displays set so that the 70cm radio has a blue display while the 2m radio has an orange display: 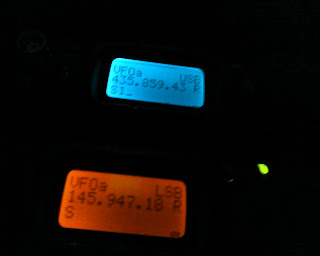 The two radios hang via their shoulder straps from the apex of the tripod, and the appropriate feedlines from the diplexer feeds into the two radios. When working statellites in V/U mode (2m up and 70cm down, ie. AO-51, SO-50, HO-68, FO-29), I simply plug the microphone into the "orange" radio and the earphones into the "blue" radio. When working statellites in U/V mode (ie. VO-52 and AO-7), I simply unplug the mike and earphones and swap. The microphone is the stock Yaesu mike, and the earphones are an inexpensive pair on a retractable reel (this keeps them from getting tangled when not in use). Both radios are essentially using the default out-of-the-box settings. The two settings of importance are CAT BAUD RATE (32400) and make sure that the Squelch/RF Gain selector is set to Squelch, not RF Gain.

Both radios are connected to the computer with CT-62 CAT cables. One cable is the authentic Yaesu CT-62 cable with a 6-pin mini-DIN connector on one end and a 9-pin serial DB9 connector on the other; this connects to a Cables-To-Go USB-Serial adapter. Both ends of this combined cable are marked with blue tape, and are used with the UHF radio. The other cable is an all-in-one CT-62 USB cable from Valley Electronics, which goes directly from the radio 6-pin mini-DIN to a USB connector. This cable is marked orange at both ends and controls the VHF radio. Both cables use the Prolific PL-2303 chipset, and I'm using driver version 3.2.0.0 (installed in Vista SP2 compatibility mode, run as admin). The cables work equally well. Within Windows, one cable appears as COM4 (this is the orange "VHF" radio) and the other cable appears as COM3 (this is the blue "UHF" radio). As long as the same cables and same USB ports are used, this numbering is consistent, so the corresponding software settings only need to be set once.

The computer that I use is a lightweight Samsung N150-Plus nebook . It comes with Windows 7 Starter, has three USB ports, and roughly a six-hour battery life. I chose the Samsung because of its matte screen; most netbooks these days have glossy screens, and I think the matte screen is easier to view in direct sunlight. Since I operate exclusively outdoors, it's important to have a screen that I can see! The backlight is plenty bright enough on the netbook to see the screen at any time of day.

So far, the Windows 7 on the netbook runs all the same applications as my home PC, with barely any performance difference (I don't notice it any slower). I've marked the USB ports on the computer orange and blue, to be sure that the interface cables for each radio always get plugged into the same port. This ensure that COM port number does not change. To keep things simple, I set the time zone on the computer is UTC so all software runs in UTC by default as well.

The software I use for radio control is SatPc32. The software is pretty easy to use, but more importantly, works very well! 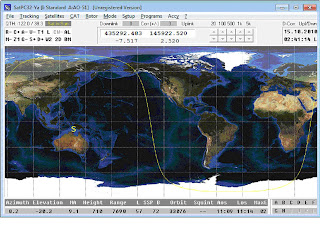 I use the software with the default settings for everything except for the radio setup. The settings I use in the radio configuration screen are as follows: Setup > Radio Setup then Radio 1 = Yaesu, Model = FT-817, Baudrate = 38400, Com Port = 3, CAT Delay = 70, Autom RX/TX Change = checked, Radio 2 = Yaesu, Model = FT-817, Baudrate = 38400, Com Port = 4. (Note that the baudrate settings are part of the drop-down menu that toggles "Model" with "Baudrate". ) The screenshot below shows the radio setup for the twin FT-817ND's:

The software I use for satellite tracking is actually the satellite module from Ham Radio Deluxe. I use this software in "radar" mode, and have the radar plot of the satellite path on the screen underneath the SatPC32 software; this way I can see exactly where to aim the antenna, since the radar plot gives a nice graphical view of direction and elevation of the selected satellite. The radar view is also a good quick way to look for future passes. 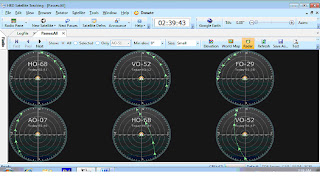 I originally tried to use HRD for both radio control and tracking, but had fits with HRD locking up under Windows 7 when controlling the radio; SatPC32 has no such problem. In addition, SatPC32 seems to use a much more streamlined and efficient method of radio control than HRD (if you use both you'll see what I mean).


6. Power.
Everything runs on battery power, so this arrangement is super-portable! I simply use the internal rechargeable packs on the twin FT-817ND's and the laptop, and recharge them as necessary. On occasion I'll use a 7 ampere-hour sealed led acid (SLA) battery to power both radios: The battery has an Anderson PowerPole connector with fuse on top, that connects to a 1-foot-long 10-gauge jumper (with ferrite cores on either end). The jumper connects to a 4-way PowerPole splitter, into which are plugged two short barrel-connector-to-powerpole jumpers (one for each radio). The use of heavy-gauge wire on all but the short jumpers to the FT-817ND's prevents voltage drop that can affect the RX radio during transmit on the TX radio (important when listening to yourself on the downlink). While testing, and transmitting on 2m with the jumper disconnected from the SLA, I managed to reset the TX radio to factory defaults (!!!) probably via RF-feedback into the 1/4-wavelength long power cord. Hence the ferrite cores, and no more transmitting on internal batteries with the cord hanging loose.

For portable operation (which is all I ever do since I don't operate indoors!), I carry the tripod (with attached antenna and radios) to the backyard (or to the pickup truck). I'll then start up the netbook computer and plug the CAT control cables into the orange/blue marked USB ports. I'll next start HRD to bring up the radar plot for the selected satellite, and after that start SatPC32. Next I'll select the satellite on SatPC32, and turn on CAT control (C+). I'll verify the radios are tracking the frequencies shown in the software, and also verify that the software frequency display tracks movement of the VFO knob on the radio used for RX. I'll then check to be sure the radios are in full-power (5W) mode by clicking the appropriate soft-menu buttons on the radio. At this point, the system is ready to go -- aim antennas and talk! 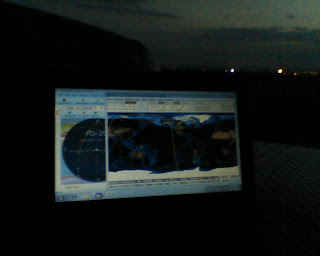 For the linear satellites (SSB), there is an extra step of using the SatPC32 CAT control dialog box to adjust the uplink frequency so that I can hear my audio clearly on the downlink -- out of the box, SatPC was needed about -2000 Hz correction for FO-29 and VO-52 and no correction for AO-07. This correction (calibration) can be saved so it's only necessary to adjust this a few times at first. The screenshots below show what the CAT control screen looks like:

And pressing "Change/Store Data File" brings up a new box allowing you to store the new uplink calibration in the DOPPLER.SQF file:

Occassionally, adjustments during the pass are necessary, sometimes if the keps are out of date, or if the computer clock isn't dead on (needs to be within about a second of UTC), or if the temp of the radios (or satellite!) has thrown off the frequency a little. During the pass, I'm sure to aim the antenna at the portion of the sky indicated in the radar plot, and I'll quickly toggle the polarization of the antenna side-to-side to find the best downlink polarization. This seems to be stable for the first and second half of the pass, but often changes during the middle.

Here's the operations checklist I typically use on a pass: 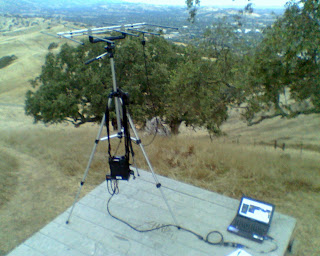 The system works great!! Working the FM sats (AO-51, SO-50, HO-68, and AO-27) is easy with the computer-controlled dopper correction, and there's no more need to manually tune the VFO's with these ones. In addition, having full-duplex on FM makes it much easier to tell if my transmission has collided with another ham, or if I'm making it into the bird at all (ie. HO-68 is a little bit finnicky, sometimes you transmit and no audio appears). Working the linear sats (HO-68, VO-52, FO-29, AO-07) is fun as well, and the arrangement works quite well. The only negative to the FT-817ND is that it doesn't update TX frequency while the PTT is keyed, so you need to unkey every once in a while for the TX to update for doppler shift.

It's amazing to me how well the Elk antenna and the diplexer work (thanks to N3TL for posting this idea!). It wouldn't seem possible to be able to hear a 250 mW signal coming from >2000 miles away on the exact same antenna that is transmitting 5W PEP simultaneously, but I've seen over and over again that it works. And works well!

So far, I've made quite a few contacts on all of the aformententioned birds. When operating out in the open (ie. sitting in back of pickup truck with clear view to west) I have found I can easily hear myself coming back on the downlink for sats down to about 3 degrees above the horizon (over 6,000 miles round-trip!). I've also found that the hams in the satellite community are a great group, and really appreciate all the help and advice they've provided so far!
Posted by KB5WIA at 10:03 AM